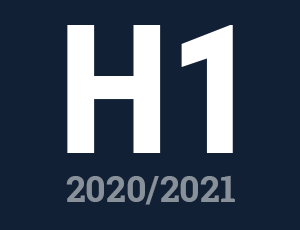 Seluxit presents a half-year report in which EBITDA is maintained despite a significant reduction in revenue. Revenue from licenses and subscriptions has doubled compared to the same period last year, while revenue from sales of radio modules for Smart Meters has been postponed, due to COVID-19 delayed roll-out of Smart Meters in Germany.

2020 has been a year marked by COVID-19. Everybody and the entire world economy was affected, first by a downturn and slow down, and then by local and geographical restrictions that create uncertainty about the future.

Seluxit has managed to maintain the expected EBITDA, despite significantly lower revenue. This is primarily because cost-reducing measures were implemented quickly.

All in all, I think we have managed to create a satisfactory result when it comes to the growth of our IoT platform and the launch of new products. We have adapted to the new reality and therefore expect to be able to deliver a result that is on par with what was previously announced, despite a significantly lower turnover in the first half of our fiscal year.

It is very clear how important it is that we create growth on our SLX IoT platform and offer easily accessible End-2-End solutions. Hereby many more can connect their things to the Internet and use the Seluxit IoT platform for data collection, storage and analysis.

I am a nerdy person who loves going into depth in diverse areas of knowledge. The less I know about a matter, the more I can learn. I always find it exciting to meet people with a different area of expertise from mine. Solving challenging problems is one of the most exciting things to do and working in a group is always more rewarding than working alone. Working with engaged, driven people, women, men, old, young, different professions, cultures, and religions is a great experience. In my work as co-founder of Seluxit, I have gained in-depth knowledge in the field of the Internet of Things, from wireless communication protocols, over cryptology and security, to cloud services and user interfaces. Doing an IPO with Seluxit in 2018 has been a fascinating journey and taught me a lot about business plans, due diligence, PR/IR, and how to professionalize and grow a listed company. Next to my work, I engage very actively in climate change discussions. My main focus is on finding solutions and the effects that CO2 has on our human body. You can find my articles about this subject on Medium and some videos on YouTube. I enjoy running, playing piano, and socializing to balance my busy work life in my free time.
← IoT Test Lab Smart Energy Partnership →