Seluxit’s coming IPO has drawn interest from the press, both in Denmark and abroad.

An article in Finans.dk (in Danish) gives a resume of Seluxit’s aims with floating the company, highlighting the effect the IPO will have on solidifying the Seluxit name. The IPO will serve as an further assurance to existing and coming customers that the already 12-year old company is not just a flash in the pan.

Michael Friis Jørgensen, Chief Analyst for the Danish insurance and finance company, Alm. Brand, can concur with the reasoning while cautioning that doubt about the security of the data Seluxit handles could lead to punishment by the market, as was the case for the American iRobot.

The Seluxit ITF story was also picked up, notably, by the Swedish press, as this article in vafinans.se. 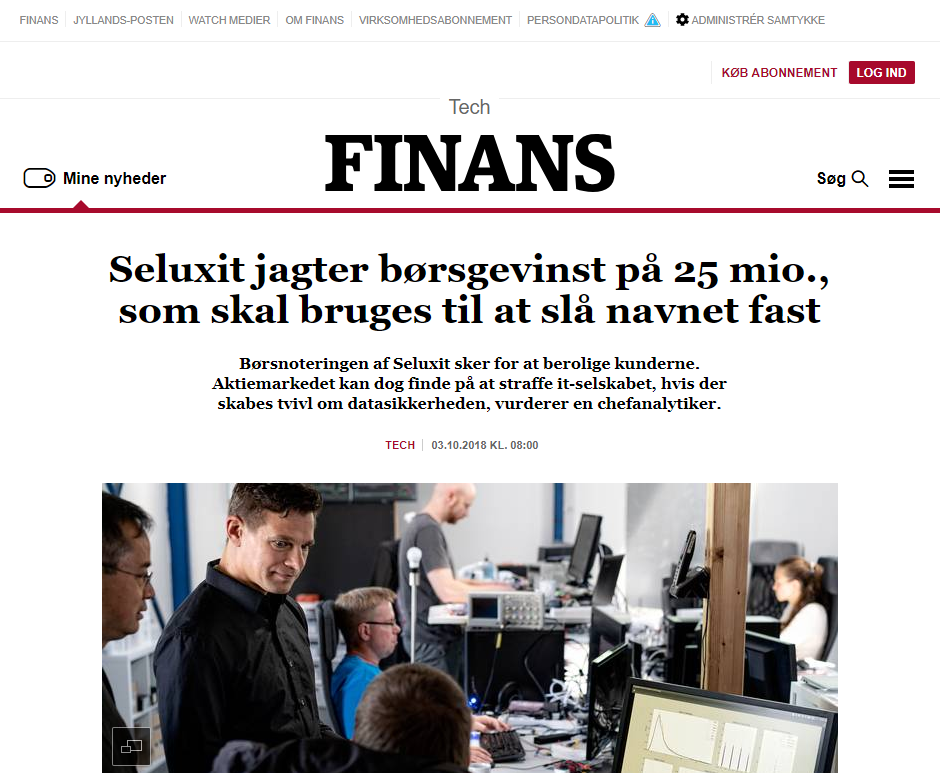 I am a nerdy person who loves going into depth in diverse areas of knowledge. The less I know about a matter, the more I can learn. I always find it exciting to meet people with a different area of expertise from mine. Solving challenging problems is one of the most exciting things to do and working in a group is always more rewarding than working alone. Working with engaged, driven people, women, men, old, young, different professions, cultures, and religions is a great experience. In my work as co-founder of Seluxit, I have gained in-depth knowledge in the field of the Internet of Things, from wireless communication protocols, over cryptology and security, to cloud services and user interfaces. Doing an IPO with Seluxit in 2018 has been a fascinating journey and taught me a lot about business plans, due diligence, PR/IR, and how to professionalize and grow a listed company. Next to my work, I engage very actively in climate change discussions. My main focus is on finding solutions and the effects that CO2 has on our human body. You can find my articles about this subject on Medium and some videos on YouTube. I enjoy running, playing piano, and socializing to balance my busy work life in my free time.
← Smarthome Project 5G and Smart Grid Talk at Tele 2018 →